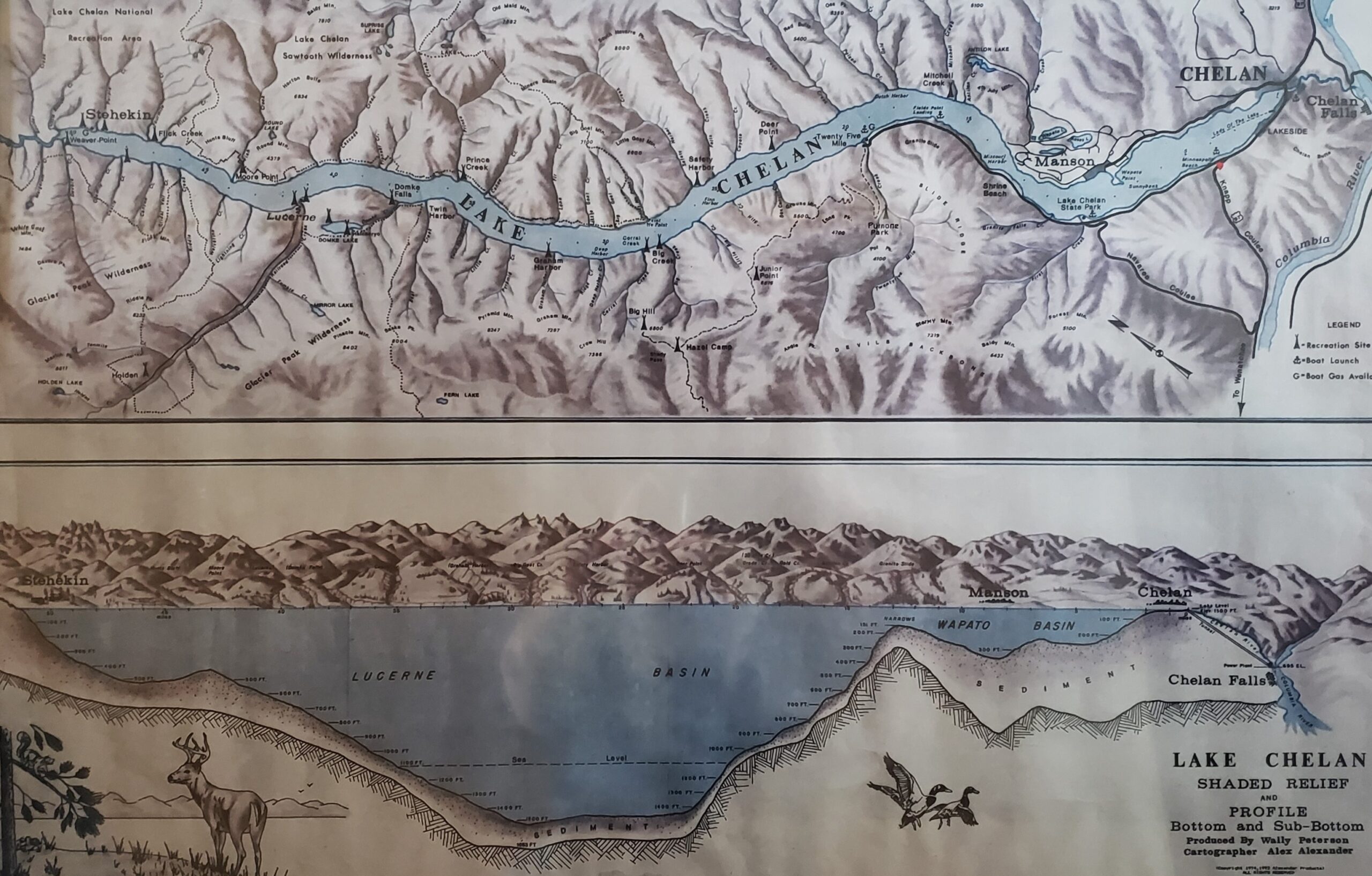 This morning I’m sitting on the deck of an (extended) family house on Lake Chelan in Washington State. It’s up north, so the morning light starts early, and there’s a very calm serene feeling on the lake. It’s smooth, calm, and quiet. Each day here ends basically the same. The summer sunsets late, and it takes a few hours for dusk to wane into darkness. This is one of my favorite places in the world.

My (at the time) fiancé, Bev, introduced me to Lake Chelan with her dad in March 1989 when we drove up here to meet her family. Otherwise, I wouldn’t even know about it. Most people don’t.

My father-in-law, Marvin, came from very humble beginnings. He was born in Beaver, Utah. The small desert farming community was (still is) at the mercy of God and a hopefully generous (cold) winter to dump enough snow in the mountains to sustain crops through the summer. To say he grew up poor is an understatement. He married his high school sweetheart and dreamed to break free from poverty. He was DRIVEN to change his life circumstance so his children would never know the poverty he survived.

He moved to Nevada and started working in the mines. He learned to operate heavy equipment and spent much of his early career in construction and mining. He worked 2 shifts a day, 7 days a week for years, and eventually parlayed his savings into additional business opportunities and even a political career in the Nevada State Senate.

In the early 70s, he learned about a new business opportunity owning and running KFC restaurants in the northwest and moved his family to a small town called Wenatchee (30 minutes downriver from Lake Chelan). In Wenatchee, he built several remarkably successful businesses that supported his family of 9 children. At the high point, he owned 14 KFC stores and several valuable business assets in Washington, Oregon, and Montana.

Along the way, Marvin was one of the most generous people you’d meet. He was a significant donor/supporter of the local Boy Scouts of America, The Church of Jesus Christ, and many other service organizations. When his best friend was about to lose his house, Marvin bought the house so his friend wouldn’t lose the house. In addition to his own children, he funded countless missionaries (around the world) and too many other charitable acts to share. Most of his kindness and generosity were unmentioned and quietly done without anybody knowing.

When I was a poor college student, I watched him write a $1,000 check for his widow sister-in-law. Every time he would drive through Beaver, he would stop and give her money to help her make ends meet.

My few words here don’t do justice to his amazing rags to riches story. His life has been both a great example and motivation to me since I met him that early spring of 1989.

We enjoyed a few days together including an unforgettable family dinner with his 9 kids (and several spouses) around the Sunday dinner table where I was quizzed about my life and beliefs before one of my favorite family members asked, “so we like you, what do you think about us?” One of the things that I found to be most impressive was that even with an abundance of money, Marvin and the family lived in a large, but modest house in town. The living room floor was a blue/green (2-3 inch) shag carpet that was 30 years old, linoleum floors and Formica countertops. He invested in his family instead of upgrading to a mansion up in the hills. His sweet wife Phyllis was (is) an angel – and I was sold. I asked Marvin for his support/permission to marry his daughter and we were married 2 months later.

Marvin wanted a place to bring the family to Lake Chelan so, in the early days of building his business, he stretched himself and bought this house on edge of the lake. When I asked how he afforded the lake house, he said, ‘sometimes you need to stretch yourself, and force yourself to create more success.’

Decades later his lake house still brings the family together throughout the summer. His large extended family still enjoys the product of 60 years of hard work. His example and his legacy still bless countless people.

We are all motivated by different things. For him, it was to escape poverty and provide an abundant life for his family.

This morning I’m impressed to sit, think, and continue to feel blessed by his hard work and persistence. It would be impossible to measure the way he helped so many people along the way. But it’s easy to see the product of his goodness continuing to ripple forward into the future. He’s been gone 7 years, and I’m enjoying a peaceful morning on the lake and week ahead with my family on the lake. All because of his vision, hard work, and sacrifice. Whatever you might believe about spiritual matters – the things you put into motion in your life (positive and negative) have great power and momentum to bless the lives of your kids, grandkids, and eternal posterity.

With all the talk of white privilege, I’ve been pondering my own privilege (if you want to call it that). My life has been incredibly blessed by my own parents and my wife’s parents, and pioneers before who believed in a future that was better than what they had. They sacrificed, and worked hard, and created a future for themselves and their families. Many of my ancestors lost children and family members along their trek across the oceans and across the wilderness to eventually settle in Utah. They blessed my life with culture, values, and examples of hard work, education, and vision. Most importantly, with a strong belief in a better future.

From the earliest moments of my life, I have believed that I can achieve anything I want. The hope and faith, from that belief, are far more valuable than money other inheritance. Faith and hope are often associated with spiritual matters. But, they are equally important in the pursuit of our temporal life. Why try if you have no belief in success? But, WHY NOT TRY when you believe that you can succeed?

I’m not saying we all need to pursue money, position, or power. But, without a doubt, every person has a purpose and reason for living. If it’s not a bright North Star that gives you direction, then look inside for even the tiniest spark of light (I promise it’s there). Meditate and/or ask God to show you your purpose. And, exercise the faith and hope to start forward step by step to achieve your life purpose.

What you do matters. Not just to you. Your values, beliefs, and example with strengthen the hope and faith of your children, grandchildren, and countless others.

You have unlimited, unfettered, divine potential. You are born to create and build a future that’s better than what you received from your ancestors and your parents. Don’t look back. Look forward and create something awesome.

This beautiful Lake Chelan was formed by a glacier over millions of years. It started with tiny drops of precipitation that fell from the sky. A single raindrop splatters with almost no impact. But, it joined together into massive sheets of ice. The sheets of ice shifted over millions of years to carve this beautiful lake into the world. And now, this morning, I sit and enjoy a peaceful Sunday morning, thanks to all those raindrops.

My life is the product of the past and a tremendous opportunity for the future.
What I do matters.

What you do matters!

Don’t let that scare you. Let it motivate you to add your little raindrop to a more beautiful world!

6 thoughts on “What you do matters”